A reader asks: How can there be such a thing as a relic of St. Michael the Archangel?

A: Ooh, this is a great question.  The Catholic Church currently recognizes different kinds of relics, and you’ll most often see a "class" system in operation, in English-speaking countries.  First class relics are bones or other bits of the body of the saint; Second class relics are things the saint used in life, like a book or article of clothing; Third class relics are bits of cloth that were touched to a first or second class relic.  According to this scheme, there really can’t be any relics of St. Michael.  But you’ll see them, and what you’re usually seeing are bits of cloth that were touched to a rock or other bit of geography associated with an appearance or apparition of St. Michael.

Now, that’s not to say that there haven’t been people who claimed to have a feather from the wing of St. Michael, or some such.  People have claimed to have all kinds of things.  In fact, competing claims to possession of Jesus’ foreskin have so incensed Rome that the Vatican threatened to excommunicate anybody who kept arguing about it. [1] If each parish priest in medieval Europe were to be believed, there were dozens of holy foreskins floating about.  The Church has maintained a hands-off practice when it comes to relics and apparitions, generally only stepping forward to recognize or condemn them when popular pressure became such that the Church simply had to take a stand.  Generally, though, the Church leaves such matters in the hands of local authorities, and allows devotional practices associated with them as long as they’re not heretical.

Often you’ll see a relic labeled "ex indumentis," and these are usually relic cases with a bit of cloth attached or inside. These are most often "brandea," which are  "third class" relics, bits of cloth touched to 1st or 2nd class relics.  This is a little misleading, as "ex indumentis" actually means "from the cloth," and would imply a second class relic.  These "ex indumentis" relics are usually third class relics, and if you have a relic of St. Michael, it’s technically none of the above, as Michael was never a living human being.  (FWIW, if you find a relic "ex praecordia" of St. Michael, please let me know, because I would like very much to have one, despite the fact that it cannot possibly be legitimate.)

But these lines are not hard and fast, despite what some folks would insist.  Popular practice and faith have always blurred the neat lines that some authorities would like to have arranged around such categories.   And it appears that in some cases, God is just fine with that. For instance, as Caesar of Heisterbach recounts, a 12th century knight unwittingly purchased a fake relic (a bridle of St. Thomas a Becket’s horse), but God stepped in to reward his faith nonetheless. Caesar writes,

The moral of the Caesar of Heisterbach’s story seems to be that God is a little more concerned with faith, devotion, and an attempt at honest piety than he is with relic categorization or even provenance.  If a relic of St. Michael helps you in your devotion to St. Michael, then more power to you.

[1] Silverman, Eric.  From Abraham to America: A History of Jewish Circumcision.  Devon, UK: Rowman and Littlefield, 2002.
[2] "Dist. VIII."  Translations and Reprints from the Original Sources of European History.  Philadelphia, University of Penn. Press, 1897.

Q: For a mojo bag, do you put the herbs in the bag all together, or do you put them in in separate packets?  Where do you store your mojo bag when not carrying it? **

A: I have never in all my years seen a mojo bag called such when it contained separate little bundles of herbs wrapped in plastic.  Put your herbs in there and let them mingle.  An exception to this would be something like my Rattlesnake mojo bags, in which the whole rattle is put inside a small plastic or metal container so that it doesn’t get crushed from regular handling.  I imagine that separate combination-amulets could be added as a single ingredient, even if they themselves contain multiple "things."  For instance, if you put a fixed nutmeg in a mojo bag, it would probably count as a single ingredient even if the nut itself contained several ingredients in its hollowed-out center.  And if you added a small paket wanga to a mojo bag, then you would have some ingredients "contained" separately from the others.  But if you’re adding an herb or powder to a mojo bag, you’d generally just add it.

Where to keep it depends on what it is.  For love/lust work, I recommend the bedroom area – under your pillow could be a good choice, if you don’t have a love altar going (in which case I would probably keep mine on my love altar).  For my own protection mojo, I keep it in my purse.  People who don’t carry purses will doubtless be nonplussed at this tidbit; in that case, you might consider keeping it with your keys, so you always remember to take it with you when you go out.  For money/business success type stuff, I would keep it in my office or shop if I ran my own business.  I might keep it in my car if I were a traveling salesperson.  I have about a billionty altars, and am often building new, short-term ones for very specific client work, so I usually keep mine on or under the applicable altar when I’m not carrying it.  But one of my protection mojos has some very unique items, and it would be irreplaceable if something happened to it; I keep that one under my pillow when I’m not carrying it.  I wouldn’t risk leaving it lying anywhere where some visitor or a friend of my daughter’s might casually pick it up and go, "What’s This?"

** See, S.?  I love ya.  Sorry if I snapped at you, and sorry if it took me so long to answer this.  I have a very bad habit of going "Where the fuck did you hear that shit?!" sometimes, when people bring up questions that strike me as being odd, and I should be better about walking a mile in somebody’s shoes than I am, and realize that when somebody is first getting into this stuff, it can be hard to sort the wheat from the chaff.  Mea culpa. 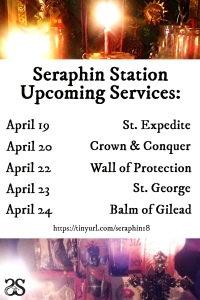 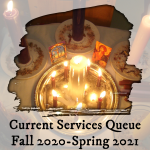 Originally posted on Big Lucky Hoodoo:
Have a glass-encased vigil light fixed, dressed, blessed, set on my St. Expedite altar, and burned for you in a community altar work service for this famed and beloved patron saint of fast results. Lights will be set the night of Monday, April 19th. There is some wiggle room and you…