This keeps coming up despite me and a bunch of other folks repeatedly insisting that it’s a misunderstanding.  I have at least one client a month say something about “the rule of three” referring to timing in spells.  This is usually interpreted as something like “three days for a sign, three weeks for movement, three months for resolution.”

Well, my dears, there is NO SUCH RULE.  I’m not entirely sure how it got to be “popular knowledge” that it was, but I hear it all the time. And when a client comes to me doing work on a major long-standing issue, working towards a major outcome on a huge slow-moving thing, and they are freaking out thinking everything they’ve done is useless because they didn’t see full resolution within three months, I get frustrated and sad that they are freaking out for no good reason and make a note to write a post about this.  If you are just recovering from a generational curse that has had your teeth in the dirt for years, and you are trying to get your show business career on track, I can just about promise that you are not going to get a big recording contract three months after you finish your first series of Uncrossing baths.  You should, however, see *movement over time.*  But 3/3/3 may not apply in your case, or it may apply but you may need to think about these things in smaller “chunks” where the phases are broken down into steps.

Some people have told me that Miss cat of Lucky Mojo teaches this 3 day/3 week rule.  Well, I am a student of Miss cat’s and I can tell you there is no such rule – it’s a guideline and people often misinterpret what she teaches.  Here is a post in which cat talks about this 3/3/3 timing thing.  And you should read it, because it explains what she means by “signs” and “movement.” If you are doing love work and your worker has recommended you set some time limits on that work, then this is the type of thing you need to be thinking about and looking for.  You do not have to pick in segments of three, though – you might decide you need signs by one month, movement by three months, and resolution by six months. Or you might decide you need signs in three days, movement in three weeks, and resolution in three months – that’s fine too.  It depends on you and your situation.

Please note a few things about Miss cat’s post up there. One is that this is what Miss cat was taught, this rule of thumb in looking for signs, movement, and resolution. Not everybody adheres to this. I personally find these specific times useful approximately half the time, though the concept of signs/movement/resolution is absolutely key and central even if the number 3 doesn’t always apply.

Another is that she never says “spells should always work according to this timeline.” She does not say that. She says, for instance, “if you see no movement within three weeks, you definitely want to do more work.”  These are not “rules” of magic.  These are handy timeframes that help you structure your expectations and “check in” as your situation progresses. Generally, while it would be unreasonable to expect every spell, no matter the situation, to fully manifest within three months, you *should* see some signs of movement in a reasonable period of time, and three months would nearly always be a reasonable period of time in which to expect to see movement even if not complete resolution – even for major, big, long-standing stuff. You *should* look for signs of movement, and you should *not* just sit there if you see no signs of movement within a reasonable period of time. If a spell is going to work, you should see movement along the way. If you don’t, you need to adjust fire.  If you are working for yourself, you can often use the 3/3/3 guideline as a “check in” guide.  If you are having work done for you, ask your worker what sort of check-in timeline you should use for your particular situation.

Note that she says “We are not looking for last-minute turn-arounds here — on the 90th day you get your result — rather, we are looking for good signs, positive movement, and a successful outcome, completing the spell.”  The bottom line is that you should be seeing movement along the way, not sitting there pining over your mojo bag that is doing nothing for your case and expecting that you will suddenly see a drastic turnaround after months of seeing nothing.  Setting timeframes and checking in will prevent you from wasting your time, money, energy, and life by waiting around wasting hope on something that isn’t working.

This 3 days/3 weeks/3 months thing is a convenient guideline that applies to *some types of work in general, sometimes.* And actually, I refer to it more often when I’m telling people about setting time limits in their own work (usually love work) than I do when consulting with a client and telling them what they should expect in their own particular spellwork – I use it as an example to explain how they should go about setting time limits and what they should be looking for when they “check in.”  This is especially important with love work, where somebody has a specific target and might be likely to cling to an outcome and keep throwing work at it when no positive signs at all have manifested at the three month point.  But it’s important to keep in mind, also, that there could be a lot of intermediate steps that you maybe aren’t considering when you go to set up your timelines.  From “meeting across a crowded room” to “marriage” in three months is totally unrealistic, even if “marriage” is your ultimate goal when you first set out to do love work.  You will need to break that up into stages in terms of your thinking, recognizing that you have to get from a first date to a relationship to commitment to engagement and that it’s not 0 to 60 in three weeks. And recognize that if you are working to draw marriage material, that is going to take longer than working to draw a weekend fling. You need to think and use common sense, basically, in addition to understanding the theory behind this sort of thing.  And be aware that some types of work are naturally “faster” while others are naturally “slower” (honey jars being a good example of the latter – those are ongoing mid- to long-term workings).  But if you are doing work on a target and you have been setting lights or carrying a mojo bag and you have seen NO signs of positive movement at all in three weeks, you definitely want to check in rather than just sitting there and setting the same old kind of light for another month.

If you’re doing love work, figure out what you can live with, what is reasonable and realistic, what makes sense for your case. Decide when you need to see action, movement, and make that the “mid-term” checkin point. You can have more than one checkin point. The idea is that you do NOT sit there for four months doing work that isn’t working.  But it might not be reasonable to expect that you’ll have moved in together and gotten engaged within four months. Your time limits for this might not fall along a 3/3/3 line at all – but you should pick some checkin times and then stick to them. If you are not seeing any positive movement at your checkin time, then adjust fire.

For more in timing, see this post on success rates and guarantees and this post on “how long will candles take to work.” See also Miss Bri’s post on timing in spellwork. 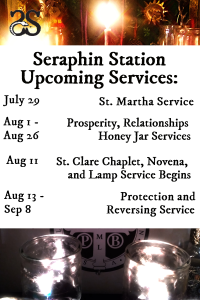 not-BS spotted on tumblr: lab-grown gems with a side rant on so-called “closed practices”

I have an entire category on this blog for “BS spotted on Pinterest,” under which I also post BS spotted on tumblr, Instagram, Facebook, etc. Tumblr has lots of BS. I’m especially (not) fond of the posts about hoodoo that copy/paste or screenshot or quote a portion of a book and then close with stuff […]

On karma, crossed conditions, and remediation

This is a slightly edited version of a reply to a client in a convo that touched on uncrossing work and the concept of karma. It is necessarily a vast oversimplification, but it is probably more easily accessible and definitely less of a rant than other things I have written about karma here or on […]

Originally posted on Big Lucky Hoodoo:
This work begins the night of July 29th,?the feast day of St. Martha, but there are several different modes of different lengths running concurrently here,?so you absolutely can book late,?as long as you see slots still available for the service you’re interested in. St. Martha in the Bible Famously…